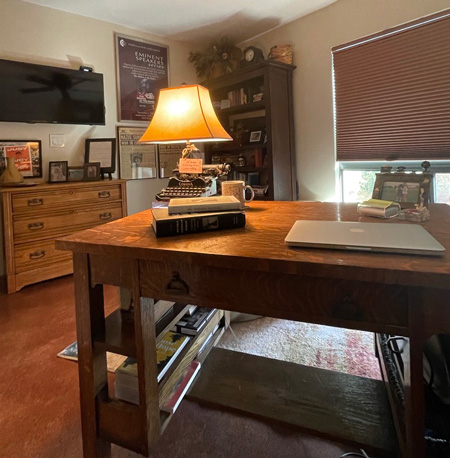 Why Do Writers Write?

I can’t answer that question for all of us. But my answer is clear.

For non-writers, a day hunched over a keyboard churning out a book sounds like college 2.0. For me, it is heaven. I need to have my fung shui all in order. My diffuser must be spewing out lavender or a spice mixture that smells like Crate and Barrel at the holidays. A snoring dog at my feet isn’t a distraction; it just reminds me she loves me.

I could lose myself in this environment for days. And obviously I do, as that’s how books get written. (I’ve got more pictures HERE to help you better imagine the scene). But there’s something else I love about writing books: the people connection.

I have met some wonderful people as a result of my writing. In 1999, I discovered the personal papers of Estel Myers, a WWII-era Naval corpsman who died at the Phoenix V.A. Hospital in 1973. He was 53 years old. The collection included yellowed newspaper clippings that told the story of the last “hell ship” that sailed from the Philippines transporting American POWs, a letter Myers wrote to his children, his death certificate and his bronze star certificate.

I was so intrigued by what the clippings described that I knew I this would be my next book. But Myer’s younger brother Ken was even more enthusiastic to have his brother’s story told and those mementos returned to the family. Belly of the Beast (2001) was the result, along with a great friendship with Ken and his wife until his death.

Writing Wolves at the Door (2006) paved the way for a number of new friendships. Virginia Hall’s niece, Lorna, was so gracious about sharing photos and memories of her very mysterious niece. And writing about this courageous one-legged spy during WWII took me to England and France, where I made more acquaintances.

After the book was published, a scene from it became a painting for the CIA fine arts collection. The unveiling of that painting at the French ambassador’s residence in Washington D.C. also include the British ambassador who arrived with a gift. Virginia had been awarded the Member of the British Empire. The medal was given to the CIA museum upon her death, but the certificate, bearing the signature of King George VI had been squirreled away in a London vault. The ambassador was able to present it to a very surprised Lorna at the unveiling.

From Shadows to Life has also allowed me to meet new and inspiring people, both alive and gone. I wrote it to bring the cancer survivorship movement (and its heroes) to the attention of survivors. And like my other books, it, too, has brought rewards.

Family members of readers have told me it has given them a better understanding of their loved one’s cancer journey. Those with no connection to cancer have told me they never imagined the history of the disease.

So why do I write? To teach … to entertain … to make new friends … and most of all to remind us that everyone’s story is worth telling.