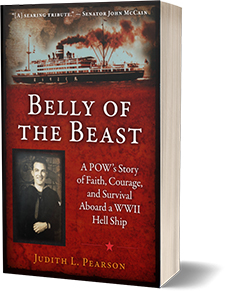 Belly of the Beast

My plan was to become the next great American novelist. To that end, I had written two manuscripts. But as we all know, plans sometimes go awry. While touring a military antique store with my dad in 2000, I came across the personal papers belonging to a WWII POW. A naval corpsman, and one of the first Americans captured at a Manila hospital in the Philippines, his harrowing story of three years in prison were horrible to read about.

However, the journey he was forced on aboard a Japanese “hell ship” was even worse. Lots of research and 18 months later, my first book, Belly of the Beast: A POW’s True Story Aboard a WWII Hell Ship was published. It debuted just three weeks after 9/11 in 2001. As had been the case with the December 7, 1941, Pacific bombings that launched us into the war, 9/11, too, was a surprise attack on American soil.

Complicating it all even more, my son left on September 13 for his first Air Force assignment, Fairbanks, Alaska. His wife and 12 day old daughter would follow him a month later. The thrill of my first book, juxtaposed on the terror of my son’s combat potential was surreal.

I was disappointed when Belly of the Beast was taken out of print in 2009 (although the digital and audio versions remained for sale). And that disappointment had nothing to do with money. I believe it’s important for us to remember the history of that war, along with its courageous participants. It’s important for us to understand all that went on in both theaters of the war, Atlantic and Pacific.

Most of all, I believe it’s important to recognize that evil humans in both theaters swayed innocent citizens into thinking their way would be better. And then, when the citizens were content and complacent, their liberties were taken away and replaced by whatever the evil humans wanted. That, of course, was mostly absolute power and riches.

As we recognize the 80th anniversary of the U.S. entry into WWII, don’t let this history fade.

Belly of the Beast will be available on Amazon and in book stores on November 9.